This beautiful medieval castle stands on the summit of a hill on the westernmost headland of the Peloponnese. It was built between 1220/1230 by the Frankish prince Geoffrey I de Villehardouin and was the strongest fortress in the Frankish principate of Achaia. 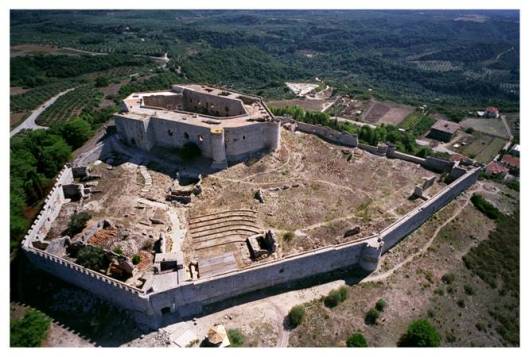 Upon arrival in the nearby picturesque village of Kastro (which means Castle in Greek), take your time to enjoy a Greek coffee in one of the traditional kafeneia. Make sure you use the toilet facilities in the kafeneion since there are only chemical toilettes at the site and are closed most of the time. From the main plateia (square) it is another 5 minutes on foot up the hill or a few minutes by car.

The location chosen for the castle was due to strategic purposes. From the top of the hill Chlemoutsi protected the famous commercial port of Glarentza (now Kyllini) and the capital of the Principate, Andravida, and controlled the area that formed the core of the Frankish possessions in the Morea  (Morea is a corruption of the word for mulberry tree in Greek (mouria).  This was the name given to the Peloponnese in medieval times since there were so many mulberry trees.

The castle consists of two enclosures: the outer Enclosure which is polygonal in shape and the Interior Enclosure.

Access to the core of the castle, where the prince’s palace was located, was via one gate, which led, through a vaulted passage, into the central inner courtyard.

Admire the stone catapult projectiles which were once used to defend the castle. Huge cisterns for collecting the rainwater under the ground provided the castle with water in times of siege since there was no well. The complex was arranged in 6 wings, 5 of which are two-storey.

The ground floor was where the stables, staff rooms, storerooms and workshops were. The upper storey was the princely residence. There were private apartments, kitchens, a chapel and the bedrooms. The princess’ bedroom has now been converted into a beautiful museum. The bedroom of the princess has a beautiful fireplace (the first in Greece) and two large light-windows with seats and, of course, the built-in closets.

After your visit to the castle, on your way back, make sure you make a stop at Arkoudi beach (near Kyllini) for lunch or a coffee.