Where to eat and drink in GREECE? Perhaps the question should be ‘where not?’ Greeks live to eat and drink. They dream about it and talk about it in bed when others are addressing other appetites. Wherever you go in Greece you might not find lodging, accurate clocks, punctual flights or a good cup of tea, but by Zeus you’ll find sustenance!

Estiatorio is the Greek word for restaurant. It’s a recent innovation in the Greek culinary scene. How does it differ from the taverna? Sometimes it’s hard to say. The easiest way to tell the difference is by what’s covering the table. If it’s paper it’s a taverna, if it’s cloth it’s an estiatorio.

The traditional, quintessential public eating house of Greece is the taverna. This is Zorba the Greek, Henry Miller and Lawrence Durrell type dining. This is what amounts to an extension of the Greek home table, offered forth to the community. Indeed it is believed that this is the origin of the taverna. There had always been inns in Greece. Since ancient times private homes along the road opened their doors to the passing public. There the traveller could get a simple meal, a bed and a bed companion. It was not until the late Byzantine era that the inn began to lose its association with the brothel and slowly acquire a reputation as a place where quality cooking was the chief attraction.

The origin of the ouzeri is in the private home. During the late Ottoman time householders were at liberty to make their own spirits (they still can today, though with limitations). Then the doors could be opened and all with a drachma could come in for a glass. To provide the necessary solid absorption material, the house cook made little dainties. These became many of the mezedhes that we know today.

The ouzeri became a place where both the libidinous Greek and the abstemious Turk could meet for drinks and a snack. Often they would bring along their musical instruments and have a jam session. They would play backgammon or dominoes and smoke hookah pipes. They would tell stories. The service and fare eventually became somewhat codified; the traditional order is for a plate of mezedhes and a quarter litre of ouzo (the alcoholic equivalent of a bottle of wine). In recent decades ouzeris have been expanding on their offerings. Some of them offer a proper meal. Some even have wine, beer and coffee.

Read more on A guide to the eateries of Greece here

The place to enjoy the breathtaking sunset while sipping on a cocktail.
A selection of meat, pasta and vegetarian dishes are served here; while the variety of seafood platter is “pentanostimo” (five times tasty)! Don’t forget to order the OUZO!
Undeniably a MUST.

Family run restaurant which serves fresh fish and other traditional Greek dishes. Just ask for the specialty of the day or let them surprise you. Either way, you will definitely not be disappointed.
Quite popular among the local connoisseurs of Greek cuisine. 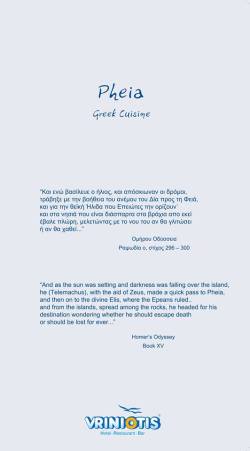 Perfect choice if you are a pizza lover and have young children. After having enjoyed your dinner, enjoy your drinks at your table while the children play in the public playground right next to the restaurant.

Family run restaurant specializing in sea food.  This is literally your Greek mother’s kitchen since mom cooks up her traditional dishes daily.

Enjoy the view of the fishing boats while eating your tzatziki and fried calamari. Don’t forget to try “chorta” wild greens with plenty of olive oil and lemon juice which make a great combination with fish. 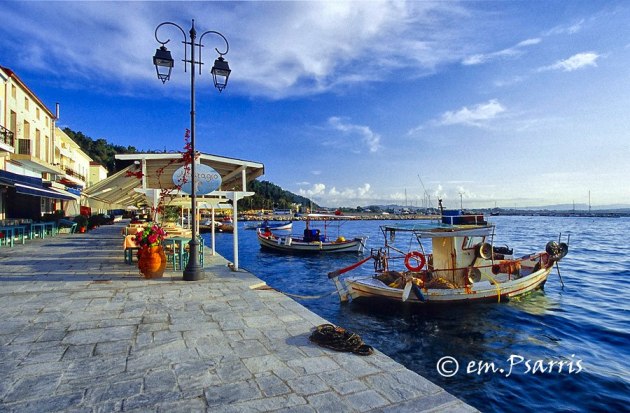 Traditional greek dishes like moussaka and stuffed tomatoes (yemista). Try the grilled octopus on charcoal with Greek salad and a cold beer. Or, better yet, have your pick of lobster (straight from the fish tank) and spaghetti. A must for everybody who visits Greece. Delicious!

Kantris is the last name of the owner of this traditional Greek taverna. It is a suitable name since the tavern is situated in the “kantriside” (countryside) surrounding the picturesque village of Leventochori, near Katakolon.

Experience Greek hospitality in this shady ranch-like looking Greek taverna. Open all day, Ktima Kantri is the perfect place to enjoy the owner’s catch of the day after a long day or night in the sea, since Petros, the owner, delivers his “catch of the day” daily. If you are not a “fish person”, apart from grilled fish, Petros’ wife Giota will spoil your taste buds with grilled meat of outstanding quality, Greek pies and homemade bread.

All vegetables and salads served are grown by the family in their vegetable garden. 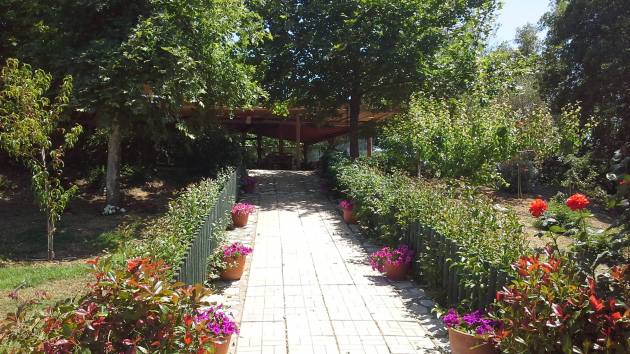 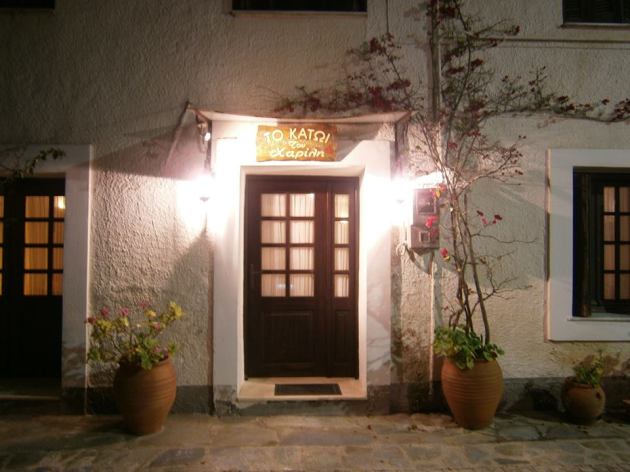 Stelios and his wife Niki prepare all kinds of delicacies. Chicken a la crème will tingle your taste buds. As a side dish, try the feta cheese in phyllo dough with sesame and honey, along with the rucola salad with flakes of parmesan and balsamic-vinegar dressing. Divine!

Don’t let the name “Taleporia” (hardship) fool you. It just applies to the hardship the owner has had to go through so that he may serve you better. The dishes are quite limited; Greek salad, little fried fish, grilled octopus and the Greek “meze” (small bite of whatever) with your ouzo. Everything will taste amazing as you sink your feet into the warm sand since the tables are set literally on the beach.

The Greek “fast” but not “junk” food

Apart from all the taverns and restaurants, you should try the Greek “take out” food as well. In the nearby villages ( Skourochori,Agios Ioannis, Pyrgos) there are plenty of so-called “souvlatzidika” where you can buy gyros and  souvlaki (pork or chicken on a little wooden skewer) wrapped in a pita together with tzatziki, fries and tomatoes).  A few of my favourites are the one  in Pyrgos opposite the marketplace named “Ladokolla” and the one in  the village of Agios Ioannis right at the crossroads, named “Stavrodromi”. The latter is very popular among the locals as well.

Eating souvlaki at a souvlatzidiko is really inexpensive since the price per pita with souvlaki is approximately 1.80 euros. Souvlaki is traditionally eaten standing, or walking, or at any rate outdoors.

Another local specialty you should really try is roasted suckling pig (gouronopoula). During the years of the Ottoman yoke, local authorities would often steal foodstuff from the Greek population. To prevent this, the people here, who used to spit roast lambs in the countryside during festivities, would place spits with suckling pigs in front of the lambs to mislead the Muslims who would not eat pork. Usually available (by the kilo) at weekends in the souvlatzidiko Stavrodromi.