Messene was founded in 369 BC by the Theban general Epaminondas following his victory at Leuktra. It was part of the strategic barrier against Sparta, the southernmost of a chain of walled cities including Megalopolis and Argos; these 3 strongholds had to confine Sparta to its own borders once and for all.

In the previous centuries the Spartans had given the Messenians a hard time. Since they were busy with becoming good warriors all the time, they needed other people (servants!) to provide them with their daily bread. In the 8th century BC, they crossed the Taygetos Mountains and invaded the fertile area of Messenia. The people who were living there became slaves and a lot of them fled and settled in other areas all around the Mediterranean. When Sparta was finally defeated in 369 BC, the Theban general Epaminondas invited the Messenians, who had been exiled from the area centuries before, to come back and build the city of dreams!

The ruins might not draw many tourists although it is a remarkable. The charming town of Mavromati sits above the ruins of ancient Messene and provides an exceptional view of the valley all the way to the coast. Systematical excavations of the site began only 25 years ago and continue up to this day.

You will enter this city through one of the original city gates just like ancient travellers did 2300 years ago. The 9 km long city wall is among the best preserved city walls all over Greece. At some points they reach a height of 7 meters.

The restoration of the theatre lasted more than 20 years. The archaeologists managed to reunite the scattered pieces and put more than 2000 seats into place. Works at the cavea have not been completed yet. Now it has been restored up to its 15th row. After its completion the capacity is estimated to reach 5000 seats which is half the capacity it had in antiquity.

Other places of interest are the agora, (the town’s large market area), the town’s central shrine and the very impressive stadium and gymnasium which form one architectural unit, an architectural rarity.

From here you will have a breathtaking view over the Messenian plain.

Tip: After your visit of the site, have lunch in the tavern just opposite the spring in the charming town of Mavromati .It is situated  above the ruins of Ancient Messene and provides an exceptional view of the valley all the way to the coast.

In the beginning of the 7th century BC, the Spartans captured Phigaleia and the inhabitants abandoned their city to save themselves. They consulted the oracle of Delphi to learn how they could recover their city. The oracle told them that they had to fight the Spartans hiring one hundred warriors from a neigbouring city and that god Apollo would help them as well. When the people of Phigaleia were restored to their homeland, they wished to thank Apollo for assisting them in returning to their native city. Thus, 8 km from their city they built, on a natural plateau, a temple dedicated to the god (Apollo the Helper). The first temple of Apollo Epikourios was made of wood. A few centuries later, during the fifth century BC, when Apollo saved them once more from the plague, the inhabitants decided to call Ictinus, the architect from Athens, to build them a new temple so as to satisfy Apollo once more.

This remote temple is situated high up in the mountains at a height of 1130 m. The fact that it is so well preserved has partly to do with the inaccessibility of the area. In other areas they would have used the temple material to build their houses or churches. The temple escaped both these fates since it was not easy to get here. In the autumn of 1987, the monument was covered with a temporary canopy. The tent was constructed to protect the temple against the elements (weather can be quite rough at this altitude).

The temple, as we see it today, was built during the 5th century BC by the very famous architect from Athens, Ictinus (the same architect who built the Parthenon).

The building material used for the temple is the local limestone and what makes this building really special is that it combines all three architectural orders (Doric, Ionic and Corinthian).

Apart from all the special architectural features of the temple, it is worth seeing how technology has been applied in order to preserve the temple. For example, a network of special devices has been set in place to record seismic events and the behavior of the individual parts. If you decide to visit, ask the guard to show you the documentary which explains everything about the restoration project. 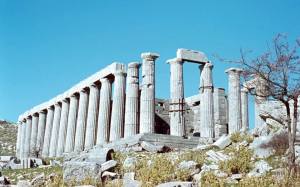