Ancient Elis (58 km from Olympia) was the city which had, under its supervision, the organization of the Olympic Games. One month before the games, all the athletes and trainers had to gather there to train under the supervision of the local judges. They would see if the athletes were good enough, otherwise they were excluded from the Games, and they would divide them into categories. Of course, in those times, they didn’t have birth certificates, so they would determine which category they belonged to from their built and body hair. Two days before the Games began, a procession set out from this city-state and all the athletes and trainers had to walk the whole distance to Olympia (58 km).  Imagine how tiring it must have been to walk such a distance before even competing in the stadium.

This procession was meant as spiritual cleansing, to prepare themselves psychologically for the religious games they were about to take part in.

At the site, the remains are scattered and, with the exception of the theatre, considerably neglected. There are also remains of training facilities, a marketplace (agora) and roman baths.

During the summer a theatre festival takes place here and people from all over the area have the opportunity to watch ancient tragedies, comedies etc. under the moonlight.

Find out that women in antiquity were just as vain as they are today since a large number of bronze mirrors and jewellery pieces were found in the archaeological site. 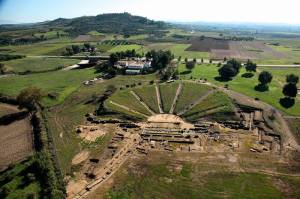